Thank you!
Your information has been submitted. To ensure delivery of your offers and rewards from Chef Works, please add marketing@chefworks.ca to your address book, spam filter whitelist, or tell your company’s IT group to allow this address to pass through any filtering software they may have set up.
Thank you and we look forward to serving you in the very near future. When the product development team at Chef Works® first started ideating the Urban Collection™, the purpose was to give chefs, servers, bartenders and general managers an alternative to traditional culinary apparel.

Don’t worry – we’ve got those and always will.

But in an industry with constantly changing trends and ever-evolving branding, variety will always be the spice of life.

Meet the Gramercy Chef Coat, one of the centerpiece products of the Urban Collection™, which was specifically designed to break the rules of culinary apparel. Visually striking, Gramercy flips the script on what’s considered “traditional.” For starters, it’s a single-breasted coat with a zipper closure. And while that might not be everyone’s cup of chai, it’s also an industry trend that our development team spotted early on.

“We talked to a lot of chefs in the year leading up to our Urban launch and we kept hearing that some chefs like zippers as an alternative,” said Jeanine Patz, the senior product manager who has been with Chef Works® for more than 15 years and helped spearhead the Urban Collection™ initiative. “They liked the comfort and freedom you don’t get with classic buttons. So we started with the idea of closure and fabric and we started to build out from there.” The idea of “executive” is as much a state of mind as it is a visual characteristic. And at first glance, Gramercy doesn’t come across as “executive” in the traditional sense.

But on closer inspection, you’ll notice that it has all of the executive perks – including 100 percent cotton denim, multiple utility pockets and a visually appealing contrast double-stitching throughout. The Chef Works® design team had the foresight to recognize Gramercy’s potential. That’s why they also designed an exclusive cut for women – which offers a more feminine and flattering design with the same great details. For a curated look, we also created the Gramercy 261 Pants that add fashion and function to the back of the house. Like the coat, the Gramercy Pants are 100 percent cotton with an elastic waistband, drawstring and zipper fly.

If you’re the kind of chef who likes to keep it classic, we highly recommend the Madrid or Milan.

But if you’re ready to break some rules, start with Gramercy. 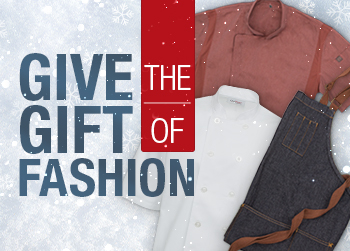